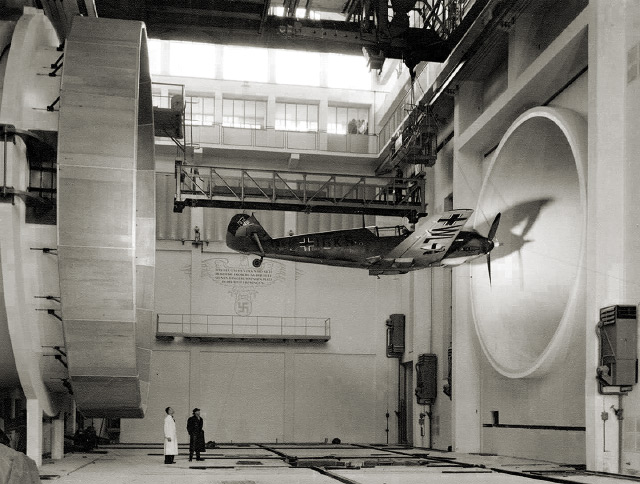 It was a marvel of camouflage. Of the millions of bombs dropped on Germany during World War II, not single Allied projectile landed on the Nazi’s most secret site.

Located on the outskirts of Braunschweing in central Germany and surrounded by a small forest of trees and open countryside, it appeared to the Allies as nothing more than another patch of German countryside. But hidden in the forest was something truly unique. It’s motto: “The German people will, though the conquest of the sky, force/enforce its duly/ befitting place in the world.” For Allied troops the discovery of the Hermann Goering Aerial Weapon Establishment at Volkenrode was a complete shock. Capt. Eric Brown Royal Navy (Ret.) was one of the first Allied pilots to inspect the amazing Volkenrode facility, “It was probably the major research establishment of the war. It was incredible.”

What set Volkenrode apart from everything else were its wind tunnels. Seven in total with four capable of generating of speeds close to mach four. No Allied wind tunnel even came close.

This advantage gave the Germans valuable insights into high-speed flight, but more importantly – swept wing technology. The Messerschmitt Me 262 and Me 163 being but two examples.

For the Allies the discovery of Volkenrode provided a rich harvest of captured German aerospace data and would lead to some of the most important advances in military and civilian aviation technology. Aircraft like the Boeing B-47 Stratoject, North American F-86 Sabre and Boeing 707 owe their origins to the wind tunnels of Volkenrode – Hitler’s Crucible of Science.