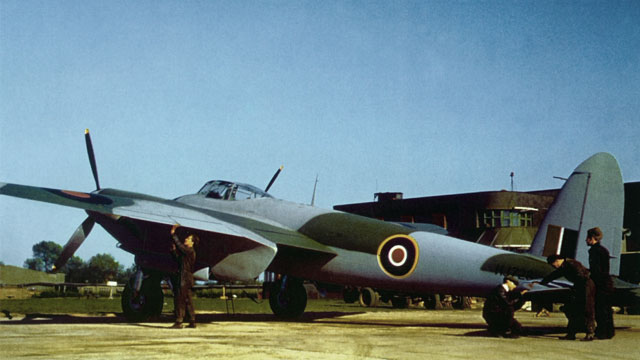 That title has to go to the de Havilland Mosquito – “the wooden wonder.” Designed as a bomber the versatile Mosquito would be used as a fighter-bomber, night-fighter, photo reconnaissance, pathfinder, courier, and anti-shipping aircraft. Through the use of nonstrategic materials the Mosquito was produced quickly and cheaply, built using a ply-balsa-ply ‘eggshell’ construction.

Heavily armed with four .303 inch machine guns and four Hispano 20mm cannon, the Mosquito fighter-bomber version could also carry two thousand pounds of bombs. The Mk IV bomber version was capable of carrying a single four thousand pound block buster bomb and take it to Berlin. Mosquito bombers were so swift they were capable of flying two missions to Berlin in a single night.

As a night-fighter it was simply the Allies best and as a fighter-bomber its achievements were remarkable. In two of the most stunning raids of the war Mosquitos were responsible for the precision attack on the Gestapo headquarters in Oslo, Norway and for breaching the prison walls a Amiens in France allowing hundreds of resistance fighters to escape.

Capt. Eric Brown said it best: “I’m often asked, what type of aircraft saved Britain. My answer is that the Mosquito was particularly important because it wasn’t just a fighter or a bomber. It was a night fighter, a reconnaissance aircraft. A ground-attack aircraft. It was a multi-purpose aircraft.”

Because of its speed and high ceiling RAF Bomber Command lost just 260 Mosquitoes over 39,795 sorties for a minuscule loss rate of 0.65 per sortie – the best of any bomber in World War II.

One thought on “The Best Combat Aircraft of World War II”