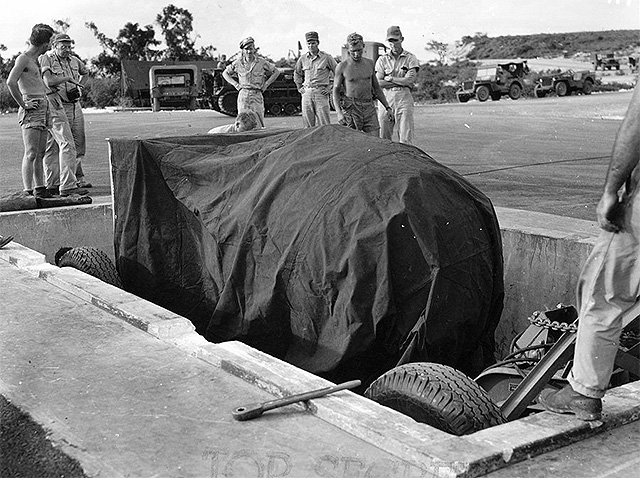 “And then one day we were getting ready to take off when they started loading the Enola Gay. There was a ring, all the way from wing tip to wing tip of Marines with sub machine guns standing in a circle around that airplane. A high ranking officer was watching to make sure they were facing out.”
Captain Davis Bunn 482nd Bomb Squadron, 505th Bomb Group

Every air force has its elite units. Each designed to execute a very specific role. One of the most famous being the RAF’s 617 Squadron – The Dambusters. In the Pacific the unit responsible for dropping the atomic bombs was arguably the world’s most unique and known as the 509th Composite Group. The 509th comprised one bomb squadron (15 Silverpate B-29s) and a transport squadron; hence the ‘composite’ designation. With additional auxiliary units the roster totaled 1,767 men.

The first Silverplate B-29s were assigned to the 393rd Bomb Squadron in October 1944. In December the squadron was moved to the newly activated 509th Composite Group led by Colonel Paul W. Tibbets. Tibbets based this new unit at Wendover Field, Utah. This isolated base was ideal for security reasons and the wide-open spaces were perfect for training.

Germany’s surrender in May 1945 altered Tibbet’s original top secret orders. The double strike planned for Europe and Japan was now mute. Only Japan remained. In June the 509th began arriving on Tinian Island in the Marianas. Shrouded in secrecy the stripped down Silverplate B-29s were disguised with squadron markings from three other units. Training missions soon began with the crews bombing bypassed Japanese islands with five ton ‘pumpkin bombs,’ shaped like the atomic bombs. After thirty-eight ‘pumpkin’ sorties over Japan the 509th prepared for its first atomic mission. On August 4, Tibbets briefed his crew revealing only that a bomb ‘of unimaginable destructive force’ would be dropped. The words atomic and nuclear were never mentioned. The target was Hiroshima on southern Honshu. Hiroshima contained several military facilities including the Headquarters of the Second General Army.

At 2:42am the Enola Gay (code name Dimples 82) took off. As they approached the target Tibbets learned from the weather scouts that Hiroshima was clear. The bomb run came in at 31,000 feet. In the bomb bay sat the device called Little Boy Mark I. Weighing in at 8,000 pound the uranium fueled Little Boy was not the biggest or heaviest bomb dropped in World War II; it was one of the most powerful. Engineers had calculated that the most damage would occur when the device exploded 1,900 feet above the ground. After a forty five second free fall from 31,000 feet the bomb exploded missing its aim point by less than 200 yards. Tibbets threw the B-29 into a steep, hard diving right hand turn. First came the light and then the shock wave from 10 miles astern. Tibbets describes what happened, “As it releases, I pulled my goggles down over my face and I’m blind. I can’t see a damned thing. How am I going to fly an airplane around that tight turn? So I immediately pulled mine off and flew the airplane around this way. There was – and I was quite aware of – a brilliance in the airplane. Everybody else was wearing goggles except me.

“There were also three shock waves from the Hiroshima weapon. The first one was a good jolt. The second one was quite noticeable. The third one was only visible to the tail gunner. He could see it coming.” The final death toll will never be known, but at least 70,000 people were killed outright.

The message was flashed to Tinian, “Clear cut. Successful in all respects.” The party was on. Twelve hours after take-off Tibbets and his crew landed safely. Upon landing Tibbets was awarded the Distinguished Flying Cross by General Spaatz himself. It was a short and wordless ceremony. Spaatz simply pinned the medal on and walked away.

Later that evening Tibbets informed Charles Sweeny, Squadron commander of the 509th to be ready for another mission.

Because Sweeny’s regular plane was still set up to monitor bomb results he shifted his crew to Captain Fred Bock’s plane – Bock’s Car. His target was Kokura; the secondary Nagasaki. Before the mission began a serious glitch almost scrubbed the mission. An inoperable fuel pump trapped 600 gallons of fuel from use. The option to cancel was given, but Sweeny realized that repairing the problem would take too long and the download-upload sequence required to move Fat Man to another B-29 was a major task. The mission did not get off to a good start. After hitting his first navigation checkpoint Sweeny was forced to circle for forty minutes waiting for the photo aircraft. It never arrived. Unable to wait any longer Sweeny headed almost due north to Kokura. Unfortunately Kodura was covered in smoke due to the previous nights attack on the city of Yawata. Three aborted runs later and with fighters insight Sweeny diverted to the secondary target.

Bock’s Car was now ninety minutes late. The delay with the photo ship and multiple runs over Kokura had put Sweeny and his crew behind the clock. When they got to Nagasaki it was 80 percent covered by low cloud. The orders were to drop visually. Weaponeer, Commander Fred Ashworth consulted with Sweeny about dropping by radar. Sweeny convinced him it could be done and Ashworth prepared for a radar approach. But seconds before the release bombardier Kermit Beahan saw a break in the clouds and took over. Beahan’s visual bomb run was a mere twenty five seconds at 31,000 feet. The Mitsubishi Steel and Arms Works was the aim point. Beahan’s deft hand put the Fat Man just 500 feet to the south of the plant.

The Fat Man bomb was more powerful than Little Boy. The plutonium bomb produced at least 20 kilotons and destroyed about 60 percent of the city, killing perhaps 35,000 people.

His mission a success Sweeny still had to make it home. Unable to transfer fuel from the bomb bay tank, Sweeny set course for Okinawa, over 400 miles to the south. His navigator calculated they would fall 50 miles short of their destination and due to a communications mix up with Guam; no rescue plane was on station to provide aid.

On approach to Yontan, Okinawa one engine failed followed by another on the runway. Shoving the props into reverse and standing on the brakes Sweeny stopped the plane just yards from the end of the runway. The third engine sputtered and died. It was a brilliant example of airmanship. Bock’s Car had just seven usable gallons left.

Japan finally surrendered on August 15, 1945 when Emperor Hirohito’s broadcast was carried to the people.