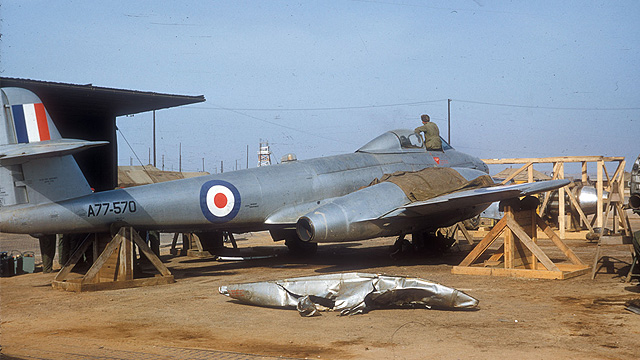 The air war over Korea (1950-53) is often framed around the battles between North American F-86 Sabre and Mikoyan MiG-15 fighter. Other jets like the Republic F-84, the Lockheed P-80, the Douglas F3D Skynight, F-94, and Grumman F9F Panther all had their encounters with the MiG-15, but there was one jet fighter that’s rarely mentioned – the British Gloster Meteor F.8.

How did the straight winged Meteor match up against the sweep winged MiG-15? As the Allies first jet fighter during World War II, the Meteor had gone through several versions by the time the Korean War broke out. The F. 8 was last and best day fighter version with a top speed of 550mph at 30,000ft. It was also well armed with four 20mm Hispano cannon. Far superior to the F-86’s six .50 caliber machine guns.

Serving with No 77 Squadron RAAF many believed it could handle the MiG-15. The Russians had other ideas. Indeed, published reports claimed that Russian MiG pilots flying from Manchuria shot down 12 Meteors in one day – more than the unit ever got into the air at once.

For the Australians they considered the Meteor as an interceptor and should be used as such. The Americans disagreed. On October 27, 1951 some 12 Meteors encountered close to 40 MiG-15s over Sunchon. The first MiG-15 was shot down, but it came at a price – four Meteors were lost. Soon after the Meteor was regulated to the ground attack role. In 1952 they switched back to fighter sweeps operations with limited results. The last encounter between an F.8 and the MiG-15 occurred in March 1953 when Plt Sergeant John Hale recorded the units’ final victory.

Like the P-80 and F-84 the Meteor was outmatched by the swifter and more powerful MiG-15. No 77 Squadron did however achieve an enviable record with 4,836 missions flown resulting in six MiG-15s shot down and some 1,500 vehicles destroyed. Close to 30 Meteors were lost – the vast majority shot down by anti-aircraft fire.