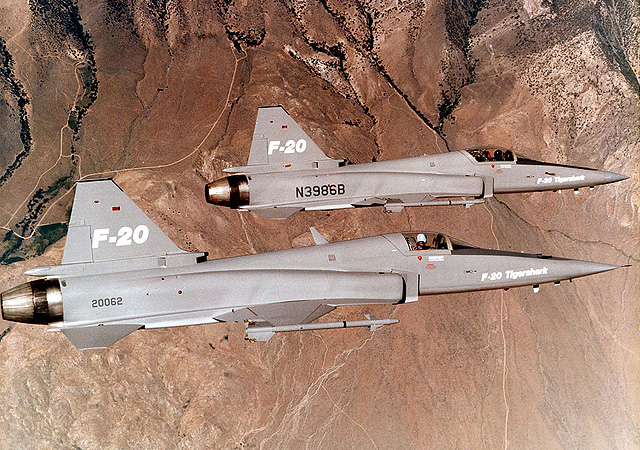 Fast, maneuverable, easy to fly and easy to maintain the Northrop F-20 Tigershark was a remarkable fighter. Pitched as low cost with the ability to operate from short runways and take on the Soviets best, the F-20 seemed ideal for cash strapped air forces. Powered by a single General Electric F404-GE-100 turbofan rated at 17,000 pounds of thrust, the F-20A was 40 percent more powerful than the twin-engined F-5E Tiger.

Everyone agreed that the F-20A Tigershark was a fast and lethal. As a logical replacement for the successful F-5 Tiger it seemed bulletproof. In competition with the F-16, however, the F-20 began to show its warts. Too heavy to be a truly ‘lightweight’ fighter and too light to be a robust, muscular fighter like the F-15E Strike Eagle, the F-20 found itself looking for an identity.

Desperate to make a sale, Northrop offered the U.S. Air Force 396 F-20As for the fire sale price of just $15 million each. In comparison the F-16’s wholesale price was 3 million more at $18 million each.