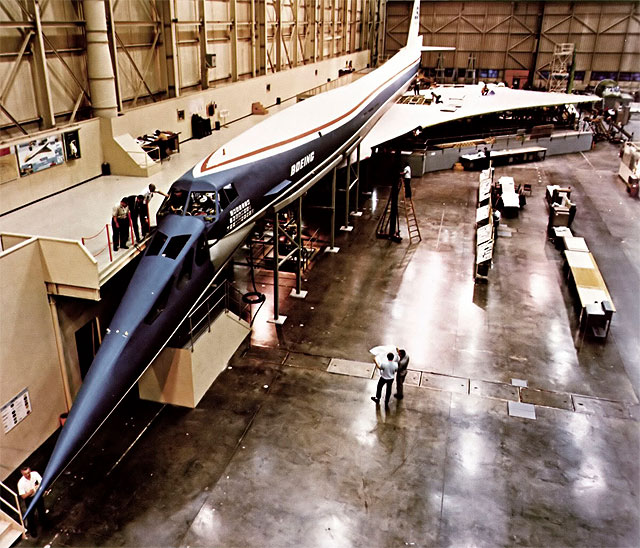 It was a super sonic challenge. When the British and French announced their plans to build the world’s first super sonic transport in 1962 the Americans were caught off guard. At the time it was thought that all future air travel would be in the supersonic realm. Leaving it to the Europeans to corner the market and with the Soviets announcing their own supersonic design the US had no choice – go fast or go home.

On June 5th, 1963 President Kennedy introduced the National Supersonic Transport program. The aircraft industry reacted quickly with Boeing, Lockheed and North American proposing new designs. On January 1st, 1967 Boeing was crowned the winner. The first Boeing design, known as the Model 2702, had a variable-geometry wing and nose with a load capacity of 250 to 300 passengers. In contrast the Concorde would be much smaller with just 92 to 128 passengers. The 2707’s variable-sweep wing was soon abandoned due to excess weight and replaced with a more conventional delta wing and designated Model 2707-300. Just as construction of two prototypes began in 1969 the program was suddenly cancelled.

Only two SSTs would ever see service – the Concorde and the Russian Tu 144. The Concorde proved the winner but it was mostly by default. Only 14 would see commercial service with British Airways and Air France. The Tu 144 was a disaster with just 55 passenger flights being flown. If Boeing’s 2707-300 had been realized – would it have been better than the Concorde?