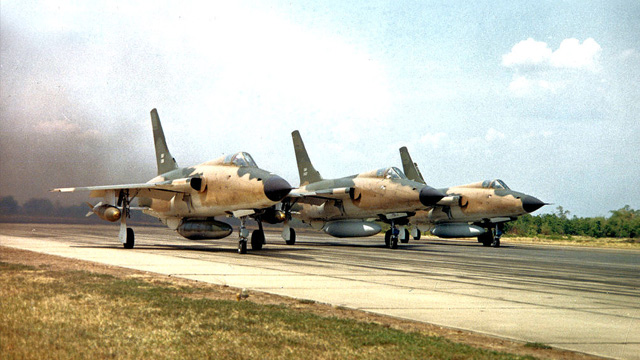 It was one of the most massive aerial bombing campaigns in history. In March 1965 the U.S. Air Force and U.S. Navy launched Operation Rolling Thunder over North Vietnam. What began as an operation of psychological and strategic persuasion, quickly changed to tactical interdiction. As a survivor of 100 missions Lt. General Spence Armstrong had a front row seat, “the work we did on Rolling Thunder was to stop infiltration of materials, ammo, and people down the Ho Chi Minh Trial.”

Between March 1965 and November 1968 the U.S. Air Force flew 153,784 sorties against targets over North Vietnam, while the U.S. Navy and Marines added another 152,399. 864,000 tons of bombs and missiles were aimed at North Vietnamese targets for the loss of 938 aircraft – most of which were shot down by heavy and light anti-aircraft fire. Flying the venerable F-105 Thunderchief, Lt. General Spence Armstrong battled the heavy flak on almost every mission, “when you rolled in on the target, the 85s (85mm anti-aircraft guns) had already finished, because they were shooting at you on the way in. But when you rolled in on the target you went head-to-head with the 37 and 57mm light flak guns.”

Not only was enemy flak a major problem, but the ‘rules of engagement’ set by the White House greatly restricted which targets were eligible for strikes. For Lt. General Spence Armstrong it was very frustrating, “we were not allowed to hit targets that were not approved.”

Get the whole story with Lt. General Armstrong and his take ‘On the Air War in Vietnam.’

One thought on “Air War Over Vietnam”